Being a published author had been a dream of mine since my high school days, but it took about fifty years to begin that journey.

My first two self-published novels using CreateSpace (now Kindle Direct Publishing) received favorable reviews in newspapers and magazines. My third novel and my first non-fiction work, both self-published, will be released later this year, and I’ve begun an aggressive search for an agent to hopefully gain access to a mainstream publisher.

I’ve never taken a creative writing course or other formal instruction. I learned to write fiction through exchanges of emails and iterations of my manuscripts with Lynda McDaniel, my outstanding writing coach and editor. Since I live in Kentucky and Lynda is in California, we’ve never met, but that hasn’t diminished the process in any way.

Because I had so much to learn, I wrote, and Lynda edited, six versions of my first novel before finally publishing the seventh in 2016. My second, released in 2017, began with a detailed chapter-by-chapter outline to aid me in focusing on development of my characters, as well as aligning the story line and timeline. The outline was critical to planting seeds of tension and conflict, and then harvesting them.

I wrote my first novel without thinking about things like genre or writing style. I had a story in mind, and just began to write. I’ve since focused my writing in two genres, Christian and Inspirational, yet striving to appeal to a broader secular audience. The more I wrote, the more my style evolved — short, fast-paced chapters with page-turning endings and hopefully believable and memorable characters. And fewer characters. My first two novels had fifteen and eighteen characters respectively; the third has only four.

The biggest change in writing the second book came with following the chapter outline. With the third, in addition to the outline I’ve adopted the approach of going back to re-read all that I’ve previously written before continuing on a different day. Laborious and time-consuming, yes. But it keeps me immersed in the evolving story and the characters, as well as ferreting out repetitions of words and phrases, sometimes from one paragraph to the next. I liken it to repeatedly passing a comb through tangled hair, getting a smoother and smoother pathway to my desired outcome.

My research revealed the two most important considerations for marketing a book by a new author are the title and the cover, so I’ve given very careful consideration to both. It’s what will catch a reader’s eye when they see the title in print, or a picture of the cover on Amazon.com or other online marketing channels.

My long-deferred dream has finally come true. As another author once said, I write for pleasure and publish for profit. There’s been some profit, but more important is the pleasure I find every day that I write. 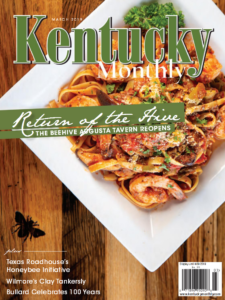 “Reconnecting”  by Alex Sandefer
Review of the book:  “Dancing Alone Without Music” by Larry B. Gildersleeve
Bowling Green’s Ben Taylor was raised by his Southern father to be a Christian man.  Readers meet him as an adult in the diametrically different, materialistic world of the financial industry in Chicago.  Although considered by some of his closest friends to be a little narcissistic, Ben worked hard for everything he could ever want in this world: a beautiful wife and a son on the way.  Ben’s world changes dramatically when his wife and unborn baby are killed in a car accident, and then again when he loses his job in the 2008 Great Recession.  He returns home to Bowling Green to recover and rediscover who he is after losing everything.
Larry B. Gildersleeve’s debut novel, “Dancing Alone Without Music,” follows Ben’s life several years after losing his wife and son. While not always the most likable protagonist, Ben undergoes a change of character when he returns to his hometown, making him relatable to readers who may be dealing with their own difficulties.  With a cast of characters there to support him, including his pastor, best friend, and father, Ben reconnects to his Southern roots, which eventually helps him connect with himself.
Gildersleeve, a Western Kentucky University alumnus, and his wife live in Bowling Green.   — Alex Sandefer

“Raised as a Christian, church-going, Southern boy, Ben Taylor’s life had turned to narcissism and materialism in the financial world of Chicago. In addition to becoming a high-powered banker at Lehman Brothers, Ben’s personal life was perfect, with a beautiful wife and baby on the way. But life delivers Ben a one-two punch, destroying his personal and professional lives in quick succession. A terrible accident snatches away his hope for the future, while the great recession of 2008 wipes him out completely, taking him to the depths of financial ruin. A just-in-time intervention of two men keeps him from making the ultimate surrender and begins his personal and professional restoration. With the help of these men and their faith, Ben rebuilds his life and repairs damaged relationships. Ben is given a second chance at life and returns home to Kentucky and his Southern roots. But the winding road of Ben’s journey back is not without additional challenges and setbacks as he discovers new strengths and friendships … and love. And after living according to his own agenda for so long, and incurring his own self-inflicted misfortune, will Ben be able to live for something – or someone – bigger than himself? Or will mistakes from his past destroy his newfound hope?

Often the goal of the author is to make the main character someone you will like, so that you want to follow the story. Larry B. Gildersleeve went in a completely opposite direction.

In the beginning, the main character is rather unlikeable. He is everything the description says: narcissistic, impatient and controlling. Sometimes I wished someone had punched him, as he occasionally even made it hard to feel sorry for him after tragedy had just struck. However, the amazing thing is that this book is able to show him going through different life events and changing his ways. He learns to be a better person, and along the way you actually start to like him and hope for the best.

One of my favorite things about this book is that Bowling Green eventually becomes the setting of the story. Ben is from Kentucky, and his father lives in Bowling Green while commuting to Frankfort for work. So, after a few different things, Ben finally moves back home.

It is here that I really fell in love with the story. Ben is becoming someone you can really like, and we see more of his family. If you are from Bowling Green or live here, you will recognize the street names, Western Kentucky University, the square and many more little details that he adds to the story. It is really fun to read and think, “Oh, I work there,” or, “Hey, I was just at the square!” It truly helps connect you to the story, and it’s a nice shout out to our great hometown.

Another great aspect of this novel is the importance of family and friends. Although there are times when I certainly like the family and friends more than the main character, I enjoyed their support, their own added stories and the way they were always willing to help out someone they were close to. We often forget, as Ben does, just how important our friends and family can be. When he becomes obsessed with looking good, having the best and flaunting his money, he begins to leave his friends behind. He was luckier than he should have been in a few of his friends, and they eventually save his life. Isolation is never a good idea, and this book reinforces what we should remember on a daily basis. Work and money are not everything.

If you are not religious, I will warn you up front (and you can tell from the description) that this book has quite a bit about God and religion within it. If that is something that bothers you, then you will not want to read this. However, I never found anything to be offensive, nor was I troubled by any of that part of it. Ben does question God and stops going to church after a certain tragedy in his life, and he also writes off a friend because of his connections. It can show us how we often blame certain things or people in our lives for something they had no control over, just because we were hurting, or needed to feel angry toward something else. It is an important part of his journey.

I loved Lauren, the woman who Ben eventually begins to date in the beginning of the book, but I wish she had had more of a voice. First, she stood up to Ben and how he tried to control everything, but then she became a back-seat partner. At one point, she tells him she is uncomfortable with how he handles his money, and she occasionally takes stands, but it felt like she often should have fought harder over certain issues. We never meet Ben’s first wife. I must say, I was not expecting him to so quickly begin dating another woman.

As a debut novel, this is a great story. Ben certainly travels a long and difficult path. It is interesting to see him work on his issues. While at the end I wondered if he is starting to go back to his old ways after perfecting an apartment with expensive pieces, I did enjoy following Ben and watching him learn and grow to be a better person. There were moments that bugged me within the story. We are often told exactly what meal everyone is ordering, or tiny small details that seem to add little to the story but bog it down overall. Ben also seemed to feel like the unluckiest man ever, and yet he finds love three times, and has wonderful supporting family and friends. It was certainly a paradox.

The author, Gildersleeve, earned a B.A. degree in journalism and pre-law from WKU and an MBA from Indiana Wesleyan University. He knew firsthand how to describe Bowling Green and he did an excellent job.

“Dancing Alone Without Music” is his debut novel. Gildersleeve and his wife, Kathleen, live in Bowling Green. Check out his first novel, while the rest of us wait for another!