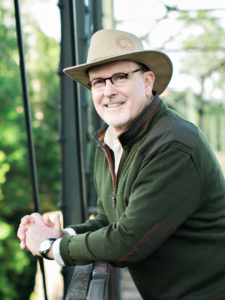 A Southerner born in Tennessee and raised in Virginia and Kentucky, Larry knew from a very young age he wanted to be a published author. He saved many of his creative writing efforts from both high school and university years, and continually wrote story ideas and character descriptions in journals for decades as his corporate career in the resort and hospitality industries took him to Indianapolis, Orlando, Miami, Washington, D.C. and Seattle, eventually returning with his wife Kathleen to Kentucky in 2014.

“I started numerous books over the years, but never got very far,” Larry recalls. “Coming home to Bowling Green ignited both my passion to write and, more importantly, a commitment to finally act on my long-deferred dream that became a reality in 2016.”

Larry describes finding his writing coach and editor, Lynda McDaniel, to be the single biggest factor in completing his debut novel. “I was a novice cook with all the ingredients but no recipe. Lynda patiently guided me step by step with things like how to develop a character’s arc and how to evolve a plot and storyline from one chapter to the next. In the process, I discovered my own unique voice as an author.”

Larry says he began writing his first novel without thinking about things like writing style and genre. “I had a story in mind, and I just began to write.” In less than a year, the long-distance collaboration of a Kentucky author and his California mentor resulted in Dancing Alone Without Music, and the sequel, Follow Your Dreams, one year later. “The more I wrote,” Larry says, “the more my style evolved – short, fast-paced chapters with page-turning endings, and hopefully engaging dialogue between believable and memorable characters.”  And fewer characters. “My first two books had fifteen and eighteen characters respectively; the third has only four.”

Larry’s third novel, The Girl on the Bench, was released in 2020 and his fourth, Blue By You, was published almost exactly two years later in 2022. Larry says his genre focus is Christian with a “light touch,” and Inspirational, yet striving to appeal to a broader secular audience. He writes with women readers in mind, but along the way has developed a devoted following of male readers, as well.

In addition to his writing, Larry is active in church, community and university activities. His daughter, her husband and their two daughters live in Chicago, and his son lives in Denver with his wife and their daughter and son.

Larry is a member of the Association of American Christian Fiction Writers, the Academy of American Poets, the Alliance of Independent Authors (ALLi), The Author’s Guild, the Bluegrass Writer’s Guild, Southern Writers and Authors and the Christian Indie Publishers Association. He is a columnist for B.G. Home and Lifestyle magazine, and a contributor to the Suite T blog.